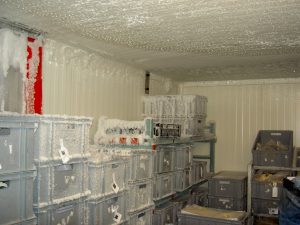 KLM Catering Services (KCS) Schipol is the biggest in-flight caterer in the Netherlands, with over 250 flights a day, producing 35,000 daily meals. KLM not only caters for its own scheduled
flights, but also supplies meals to other airline operators such as Northwest Airlines, Cyprus and Kenyan Airways. 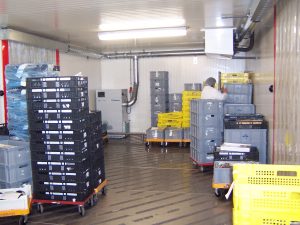 The greatest concern of Edo Cuiper, KLM Catering Services Technical Engineer was the freezing snow and ice on the floor and ceiling: “The floor was very slippery and unacceptably dangerous, and we had to do something,” he said. As well as the risk of accidents, Edo said “We had ice and snow on the evaporator, it was difficult to clean, and difficult to keep at a constant -20ºC, we had frequent defrosts, typically six times daily for one hour.” The simple and effective answer was to remove the moisture from the air and this is exactly what Munters IceDry® systems do so well.

KLM Catering Services installed three IceDry® systems in their cold stores, as Munters’ system is designed for low temperatures. Munters desiccant dehumidifiers work by drawing air from the cold store through a rotor containing silica gel. In removing moisture from the air, Munters calculate, then control the dewpoint temperature required – the point at which moisture in the air will condense out and freeze onto surfaces. Once the moisture in the air is removed, the now ultra-dry air is piped back into the cold store area. By removing the moisture, the IceDry® system also assists in increasing the periods between defrosts, reducing energy utilisation and refrigeration plant cleaning.

“The difference before and after the installation of IceDry® is like night and day,” says Edo Cuiper. “The coldstore rooms are clean and the floors are no longer slippery”. 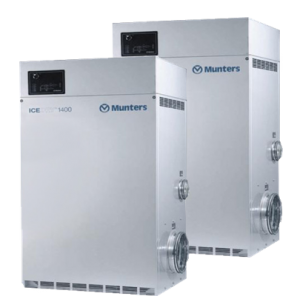 The safety improvements also got the thumbs up from the “ARBO” welfare at work organisation. Improving the safe operation of the environment had previously been attempted by adding grip strips into the floor to make it less slippery. This proved unsuccessful as after only two weeks, the ice built up again. Now with IceDry® this is completely clear. Moving the food pallets is also much safer, and loading is faster, the catering team can read all the labels correctly without having to wipe the frost off.

The improvements have not only been seen in safety, KLM Catering Services now only defrost once a day for half an hour, it is not really necessary, however, it is done as a precautionary measure for cooling equipment safety. Previously, KCS observed ice build up on the coldstore fan during the night, which occasionally was so severe that it meant that the fan could not blow anymore. Now this has been completely solved with Munters IceDry®.

KCS also found through constant electronic temperature tracking that they have been able to maintain much tighter temperature control. The reduced defrost with IceDry® enabled KCS to reduce the temperature of the refrigerant evaporator coolant from -27ºC to -22ºC.

KLM Catering Services see the Munters IceDry® as a primary element of their HACCP initiative for safe and effective working – in short, it has been a great success.